This is actually more of a flat tour than a room tour, seeing as my room is the size of a box. (I’ve also done previous room tours in France and Edinburgh). I knew flats in Hong Kong were small, but it’s hard to appreciate just how small until you’re actually here and faced with living in one. I didn’t get a choice in where Im living, as the flat is provided by the recruitment company that hired me and placed me in a school. Anyway, the flat is right in the middle of Mong Kok, in the Kowloon area. We’re up on the 20th floor, and I’m sharing the place with another teacher with the same company (naturally I’ve left out her room in this). 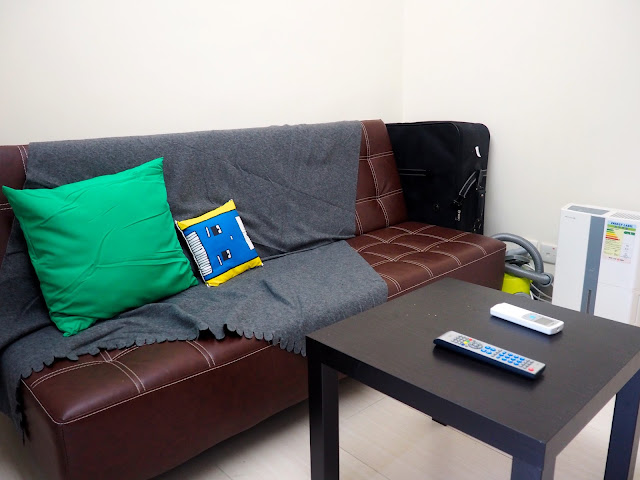 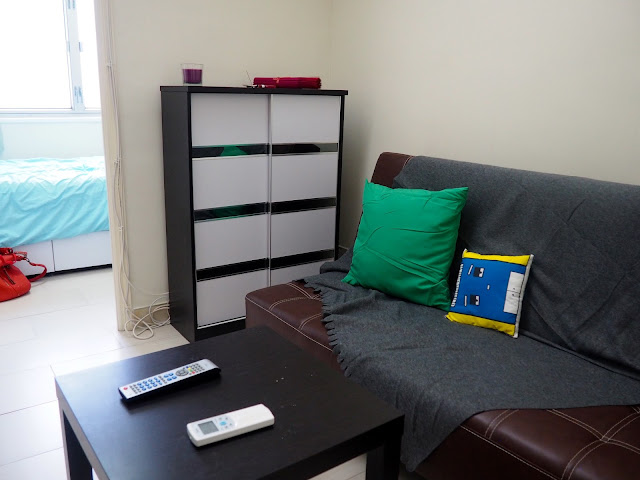 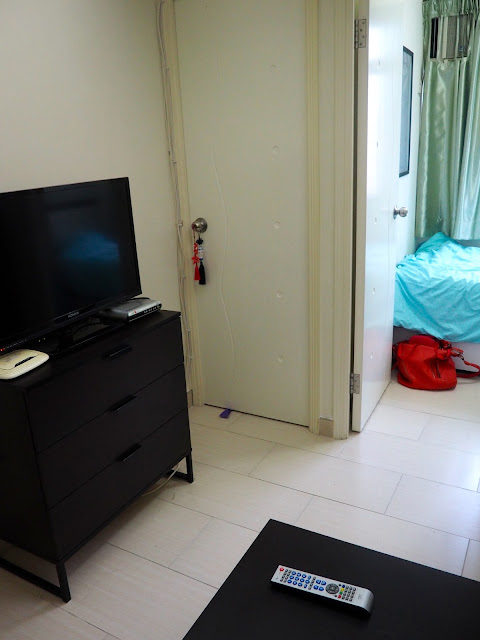 So first, you enter the flat straight into the living room, which is the biggest room in the place. It’s a little sparse, given its size, with just the sofa, table, TV and cupboard. The sofa cushions were bought by my flatmate to brighten the place up a little, as we’re not allowed to put anything on the walls, which limits our decorating options. I’ve broken that rule in past places I’ve lived of course, but the concern here is not chipped paint, but rather that the concrete crumbles when you stick things to it (so I’ve been told). Anyway, there’s a glimpse of my room through the open door, directly opposite the front door, while the closed one leads to my flatmate’s room. You might also notice my suitcase down the side of the sofa in the first photo, since there’s nowhere to put it in my own room… 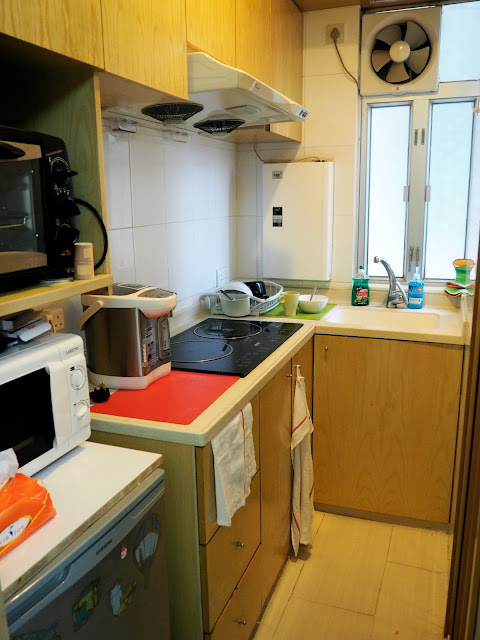 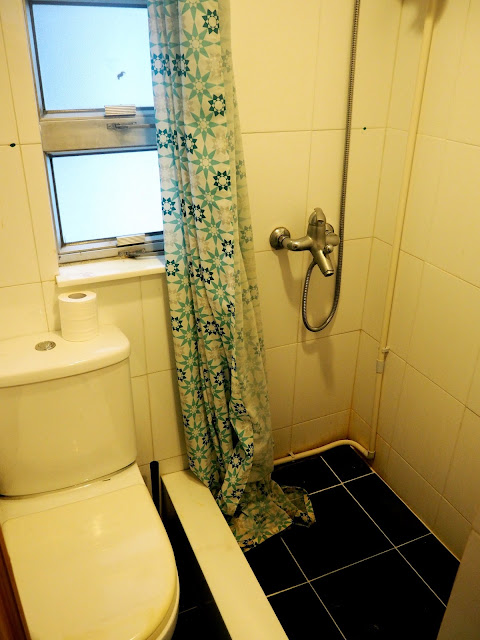 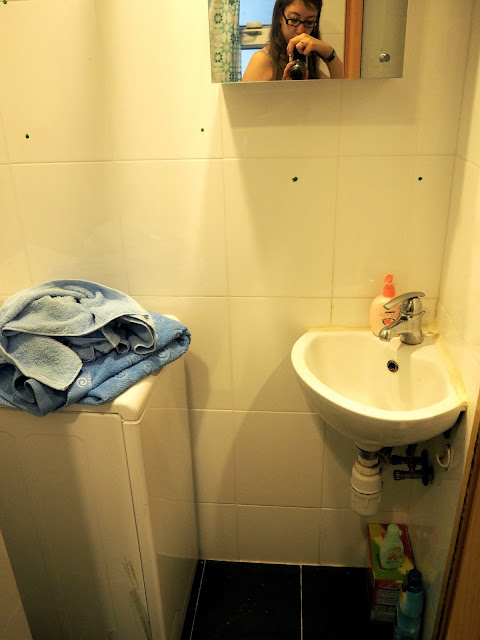 Immediately on the left as you come in is the kitchen – yep, it’s small. Only one of us can really cook at a time in there, but we’re managing ok. It’s actually not a bad kitchen in a small flat, but it does limit us somewhat – the fridge can’t hold much, and although we have a small grill, it doesn’t work, and neither does one hob (we’ve informed the relevant person, just waiting for something to be done!). I’ve been making pretty basic meals so far. The funny machine on the counter is also the Hong Kong version of a kettle – it keeps the water hot for longer, but I’m still not entirely sure how to tell when the water is boiled… The bathroom is through a door off the kitchen (a bit awkward really, when one of us needs in while the other is in the kitchen), and also, you guessed it, small. But it has all the facilities we need, including the washing machine – my biggest complaint is that if you’re taller than me you’ll have to crouch down to get under the shower head, as I only just fit, while leaning back slightly! 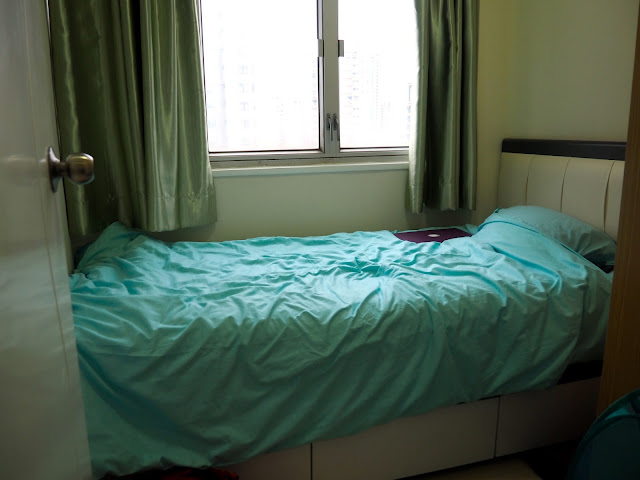 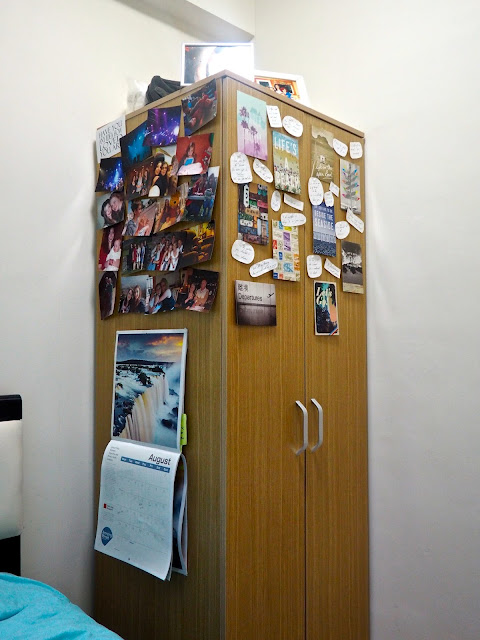 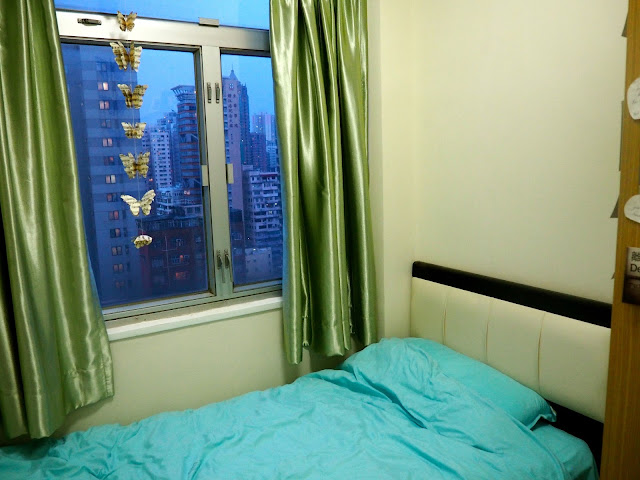 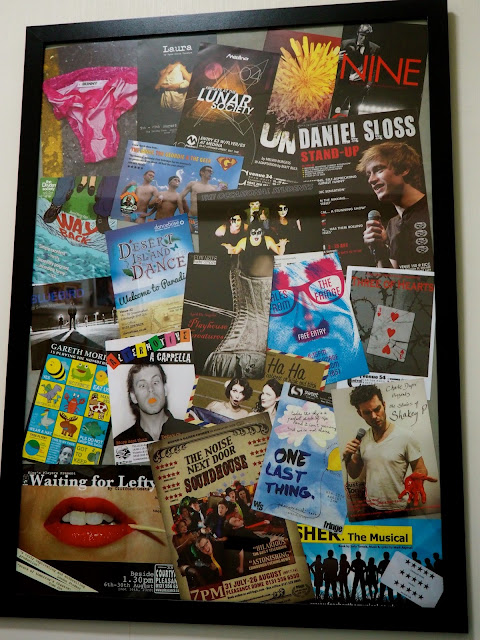 Finally, this is my room. It’s definitely smaller than my flatmate’s, but she was here first and I would have made the same choice in her position. There is literally only the bed and wardrobe, and a tiny bit of floor space to open the door. I’m almost the same length as the bed, which stretches wall to wall, so I’m reckoning the room is 36m squared at most. There’s extra storage drawers under the bed too, and I’ve crammed a lot in the wardrobe. Not being able to put anything on the walls means all my photos and little bits and pieces I brought are stuck on the wardrobe. There was also an empty frame on the wall (and no, I’m not allowed to drill any more holes either), which I filled with old Edinburgh Fringe flyers. I brought these as they’re far easier to transport than my big posters, and I had to bring some stuff to put up of course, to make the room feel more like mine, though it’s certainly not as fun and colourful as my previous rooms (see the earlier links).
Overall, yes the flat is pretty small. However, it more or less has everything we need, and works fairly well with the space we have. I’ve been living here for two weeks now and it’s surprising how fast you get used to it! I’m mostly only here in the evenings anyway. Now we just need to find some more ways to brighten it up, on a budget of course… suggestions?