Charlotte Travel
Me, writing a blog post months after actually going somewhere? Yeah, sounds about right these days. Anyways, a friend and I took a weekend trip to the Isle of Arran and Ayrshire last summer, so this should be the first of two posts about the whole trip. Initially we had planned to stay on Arran, but all the accommodation options were booked up, so instead we stayed at a B&B in Saltcoats on the mainland, just a ten minute drive from the ferry terminal in Ardrossan, and did a day trip to Arran from there.
Thank goodness we were staying close by though, as we ended up getting the ferry at like 6.30am, and if you know anything about me, you’ll know I’m not a morning person. A fact that wasn’t aided by me having gotten my first Covid vaccine the day before, so my arm hurt, and I couldn’t move around much while sleeping as I normally do, and therefore didn’t sleep well at all. Copious amounts of coffee were consumed that morning. We quite enjoyed the ferry trip though, as it’s not something I do often, so it was a bit of a novelty to park the car in the belly of the boat, and then roam around the decks, grabbing more coffee and checking out the view of Arran approaching on the horizon from the top deck, though it was a bit cold to stay out too long.
Once we docked on the island, we were straight off in the car to park at the base of Goat Fell, the highest of island’s four Corbetts (Scottish mountains between 2500m and 3000m high). I like hiking, as my numerous posts about hikes will attest to, but the friend I was with LOVES it, so when I asked her what she wanted to do on our weekend trip, mountains was her first response (also because her other hobbies are all quite extreme and involve heights and other things that scare me, so hiking is our common ground!). She hikes Munroes (Scottish mountains over 3000m) regularly, so this was a walk in the park for her, but a bit more challenging for me. That said, it wasn’t nearly as hard as I’d been bracing for, as most of the route wound quite gently up a sloping hill. Only the final stretch was the really tough part, hauling ourselves up a path made of large, rocky steps (murder on my knees on the descent), and for the last fifteen minutes or so, I was very much in the mind state of “I’m so done with this, but I can see the top, and why aren’t we there yet?!”. In the end though, I was stood on top of a mountain after a 2 hour hike at about 10 in the morning, which is a small miracle for me! 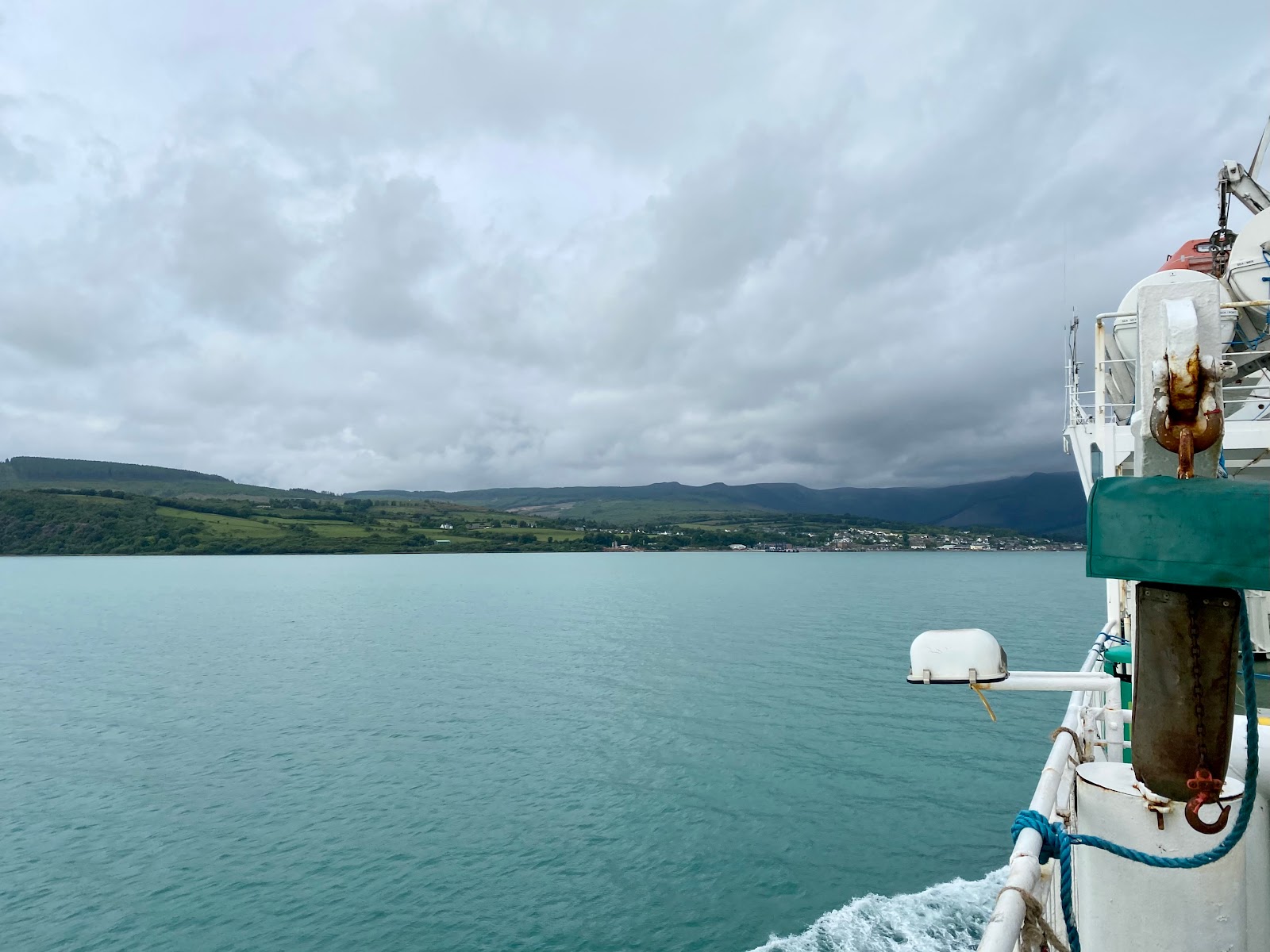 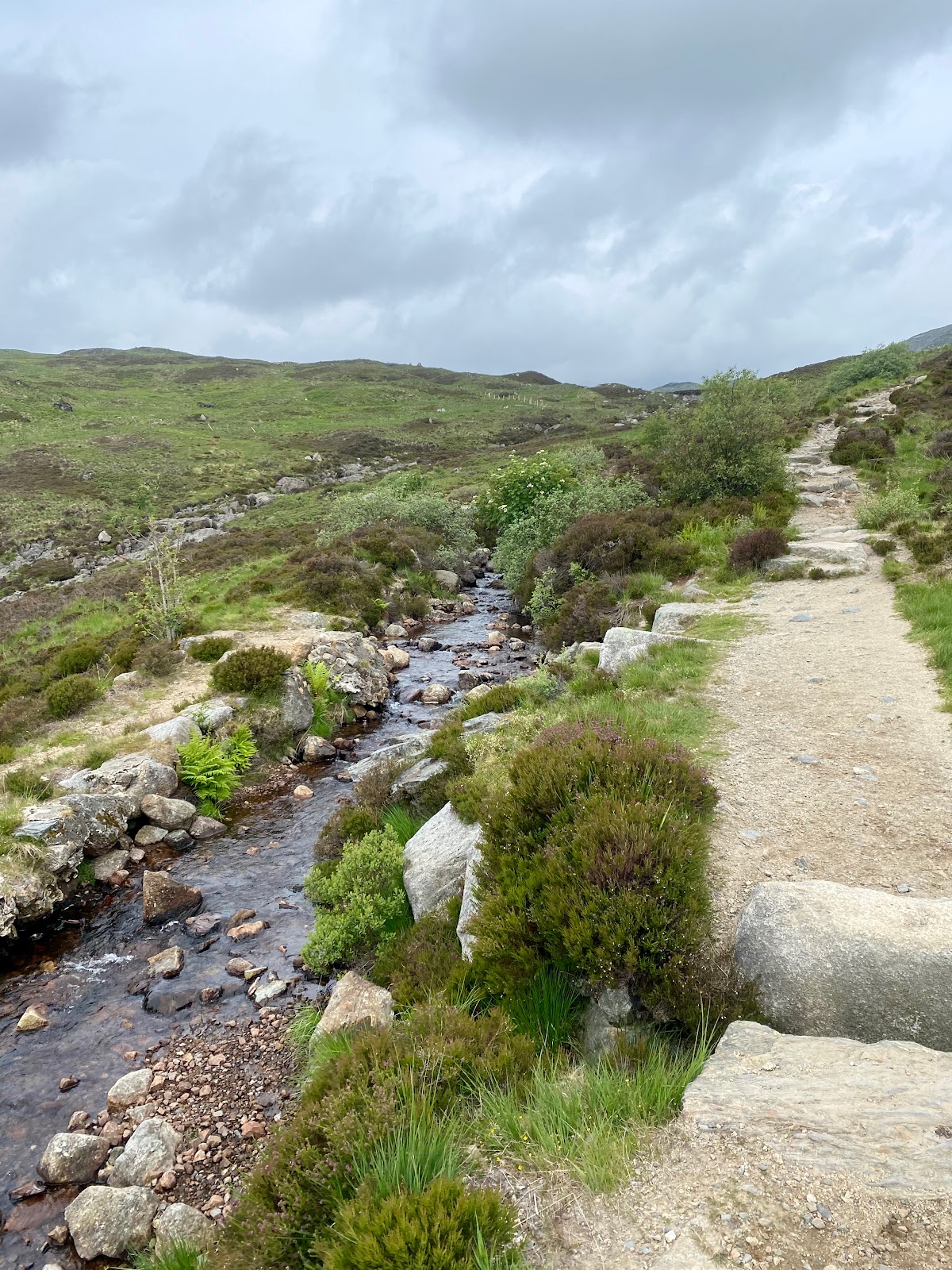 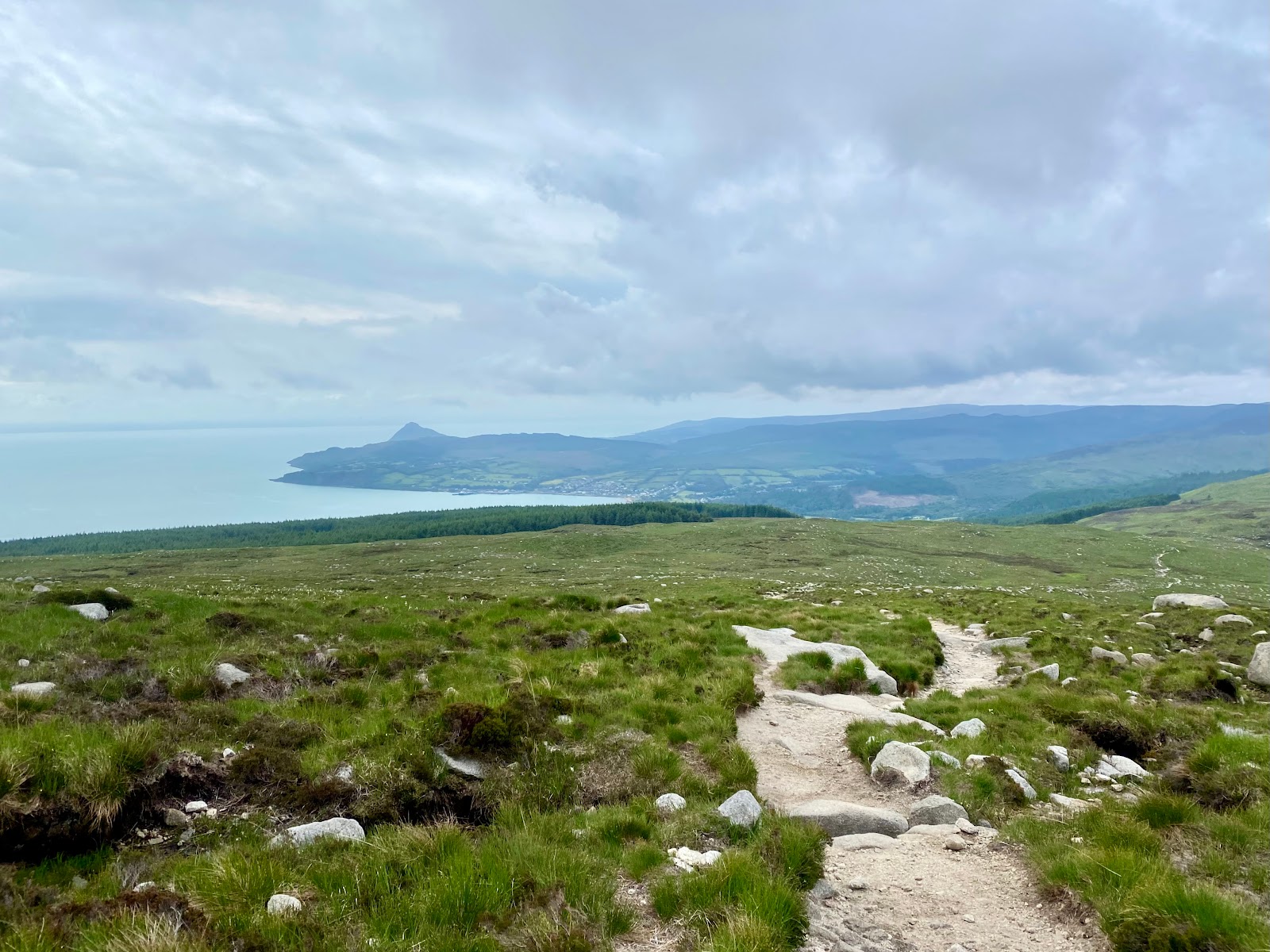 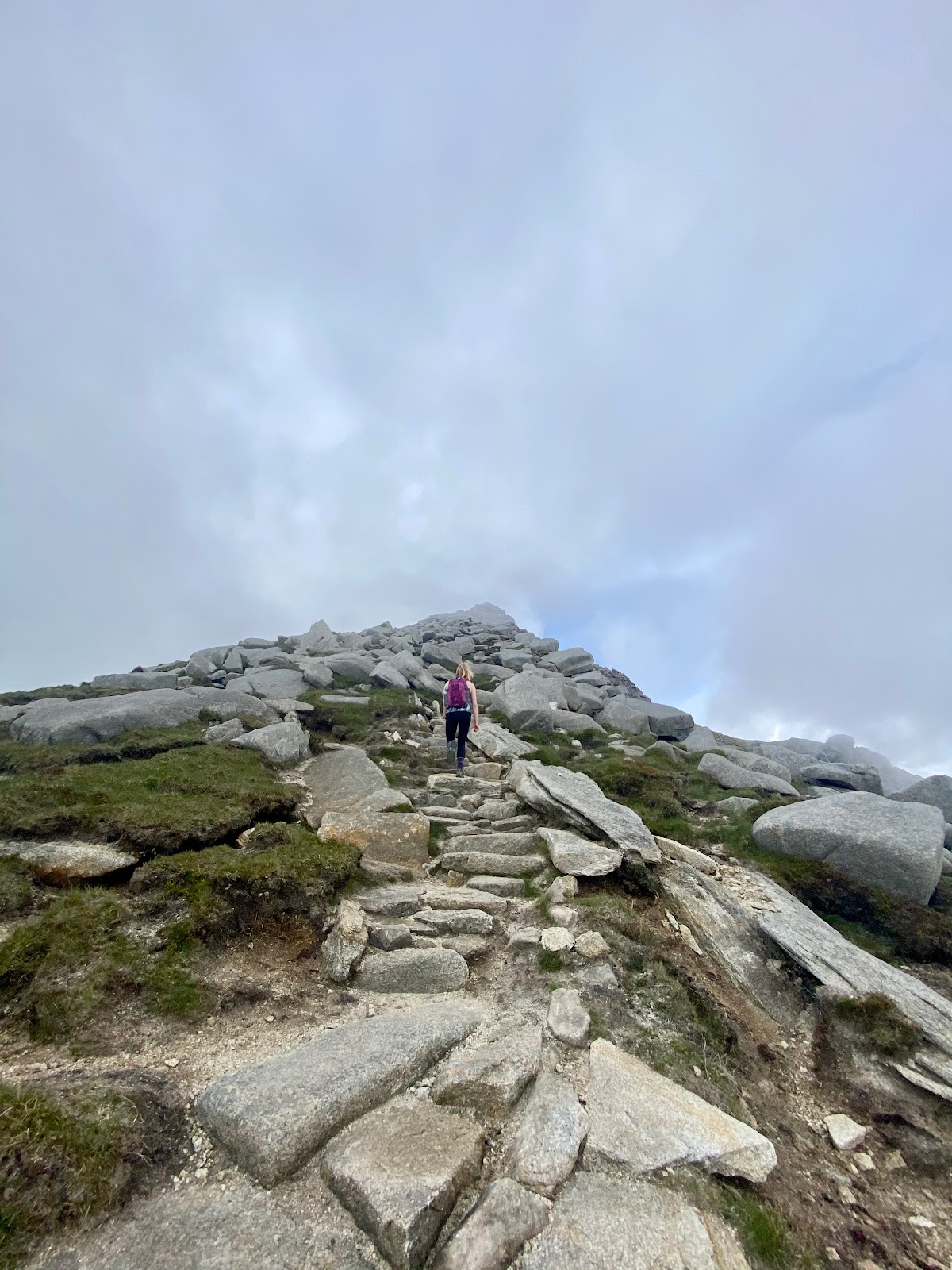 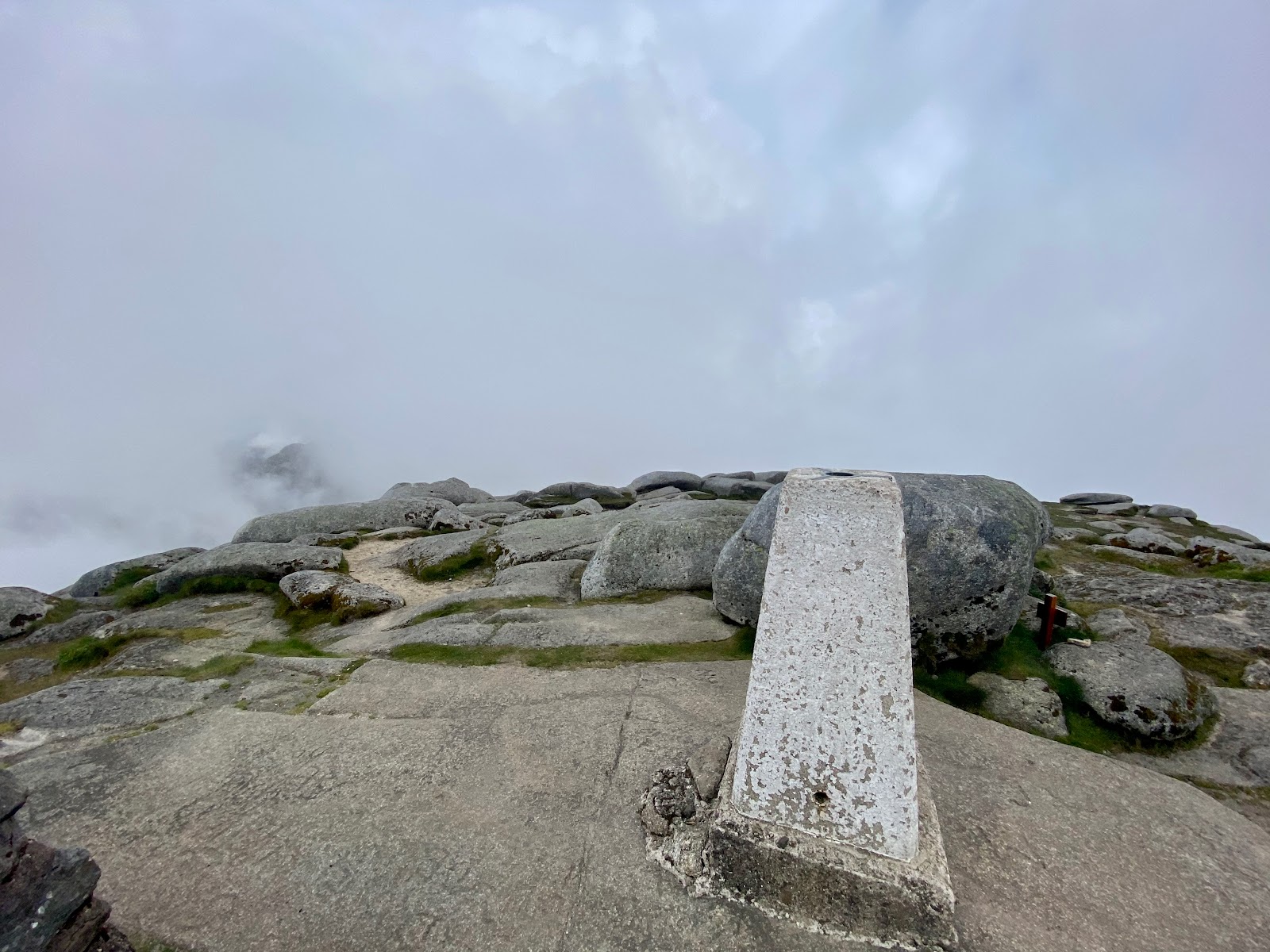 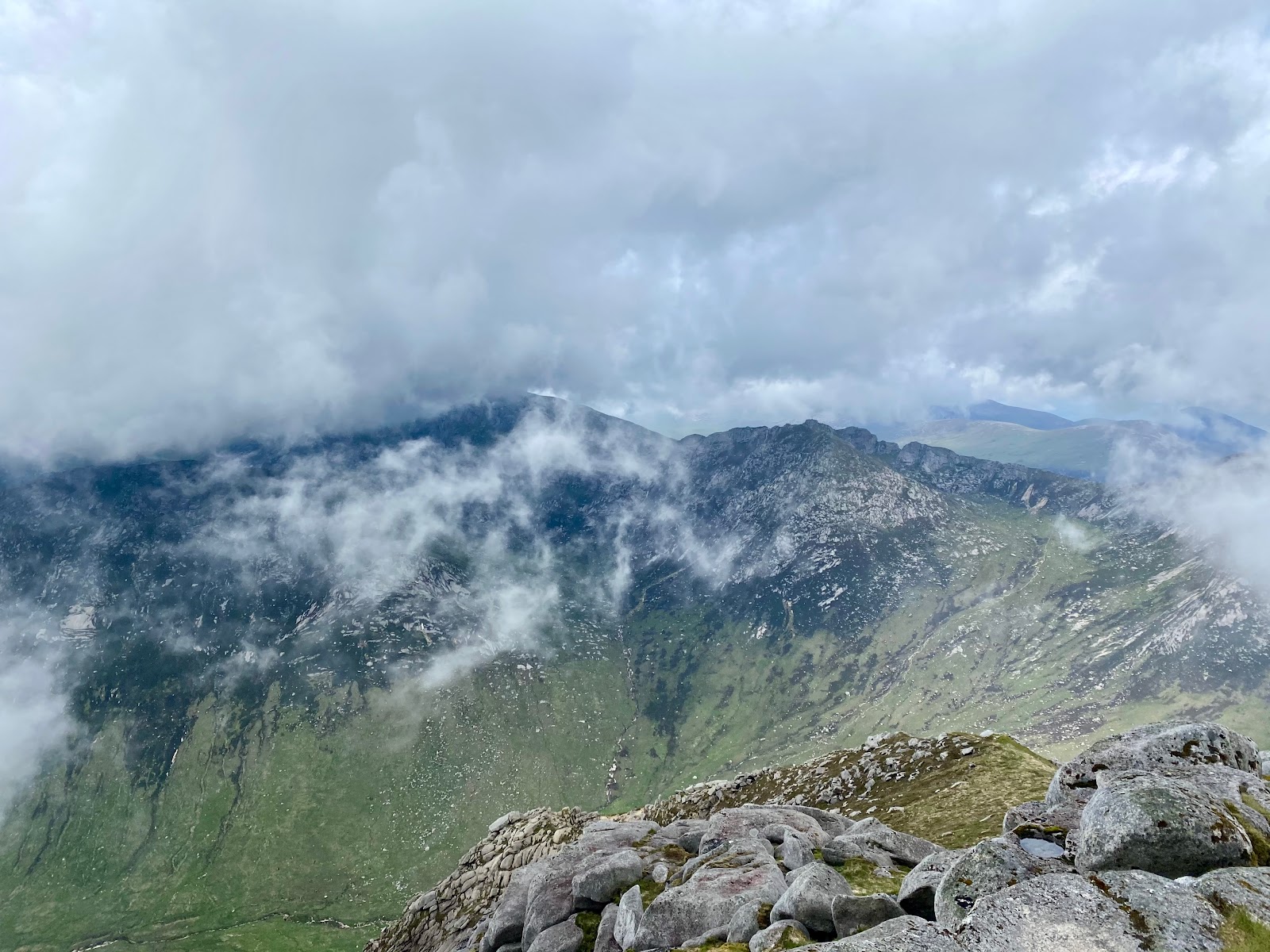 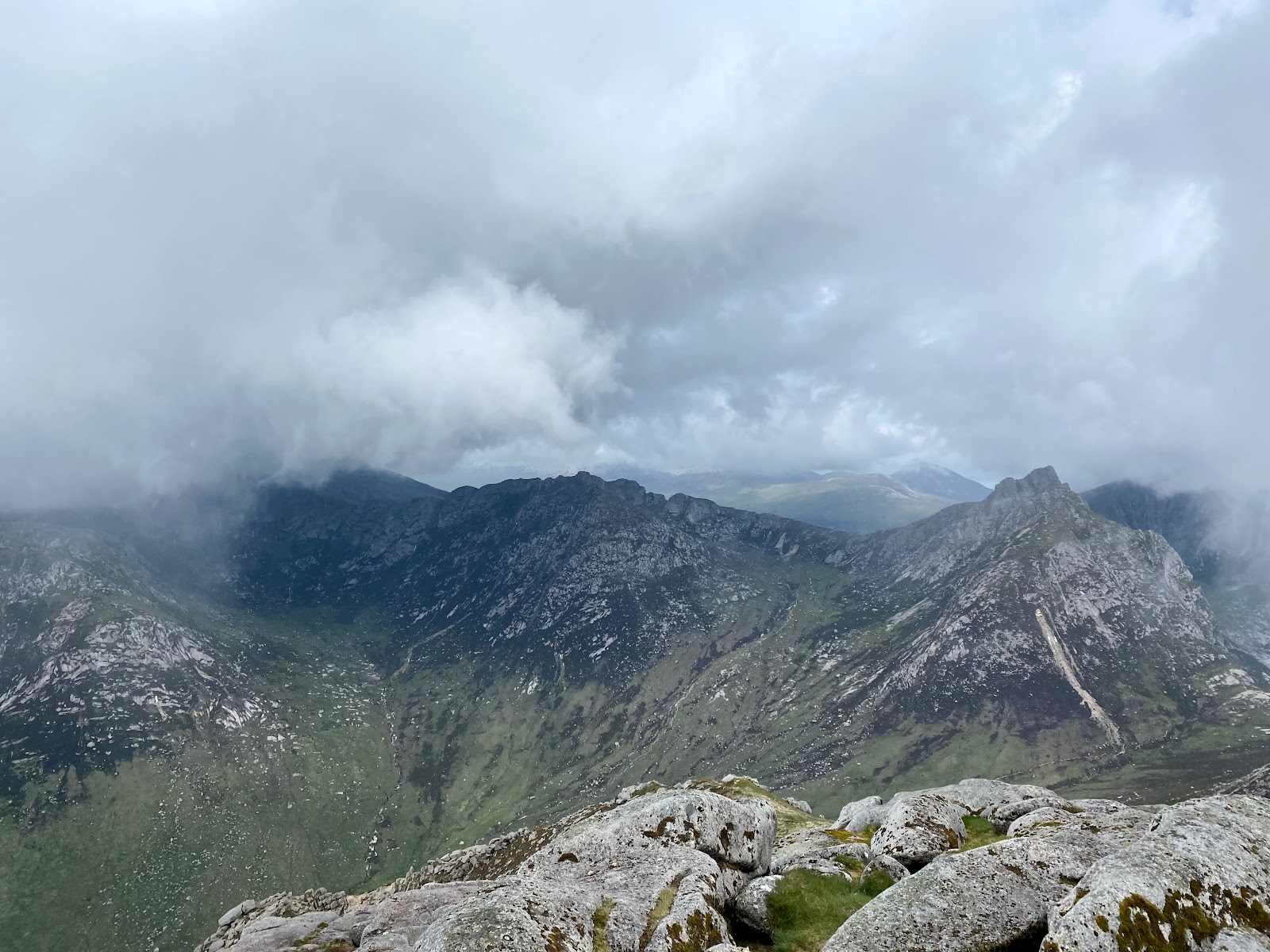 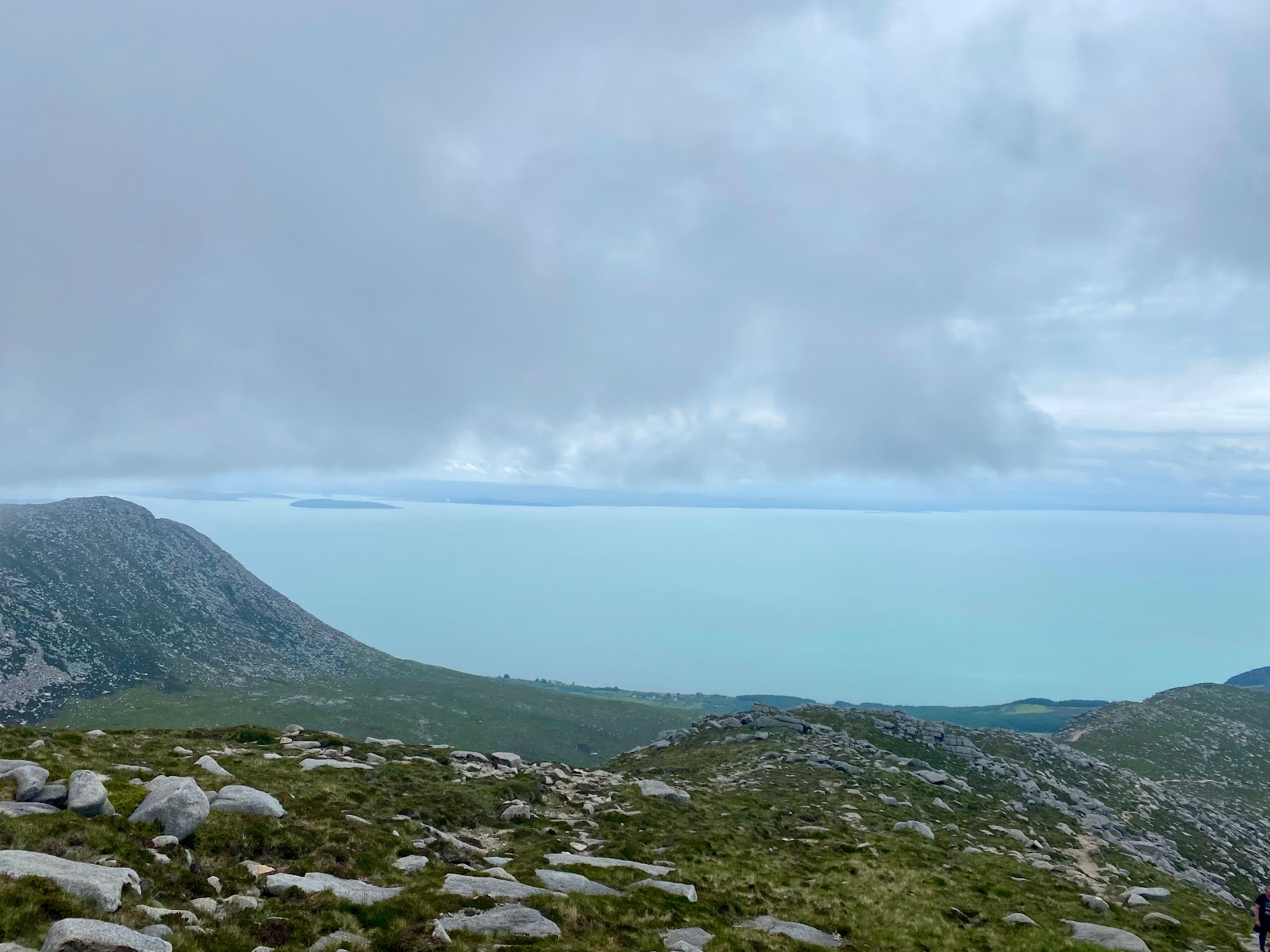 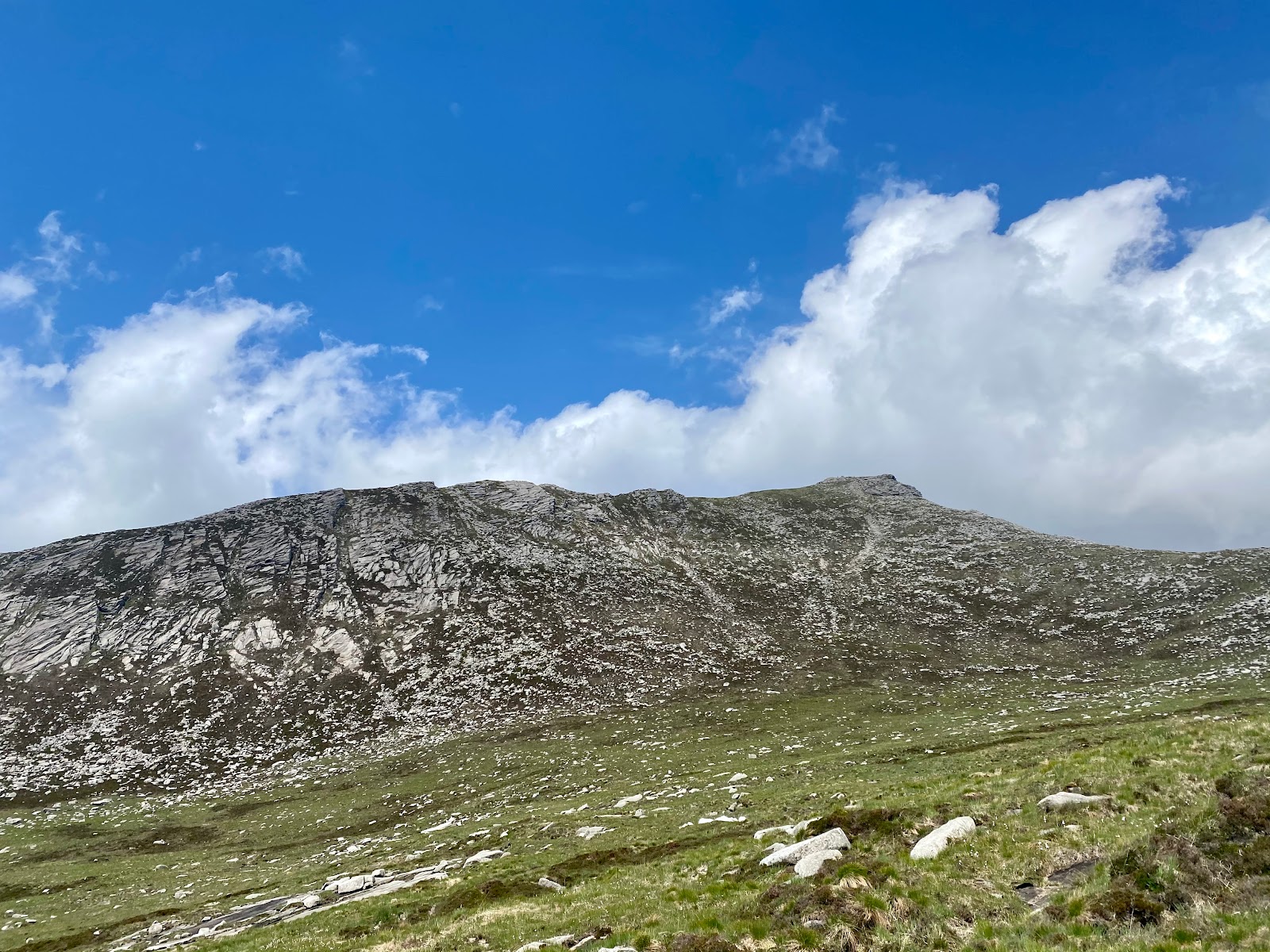 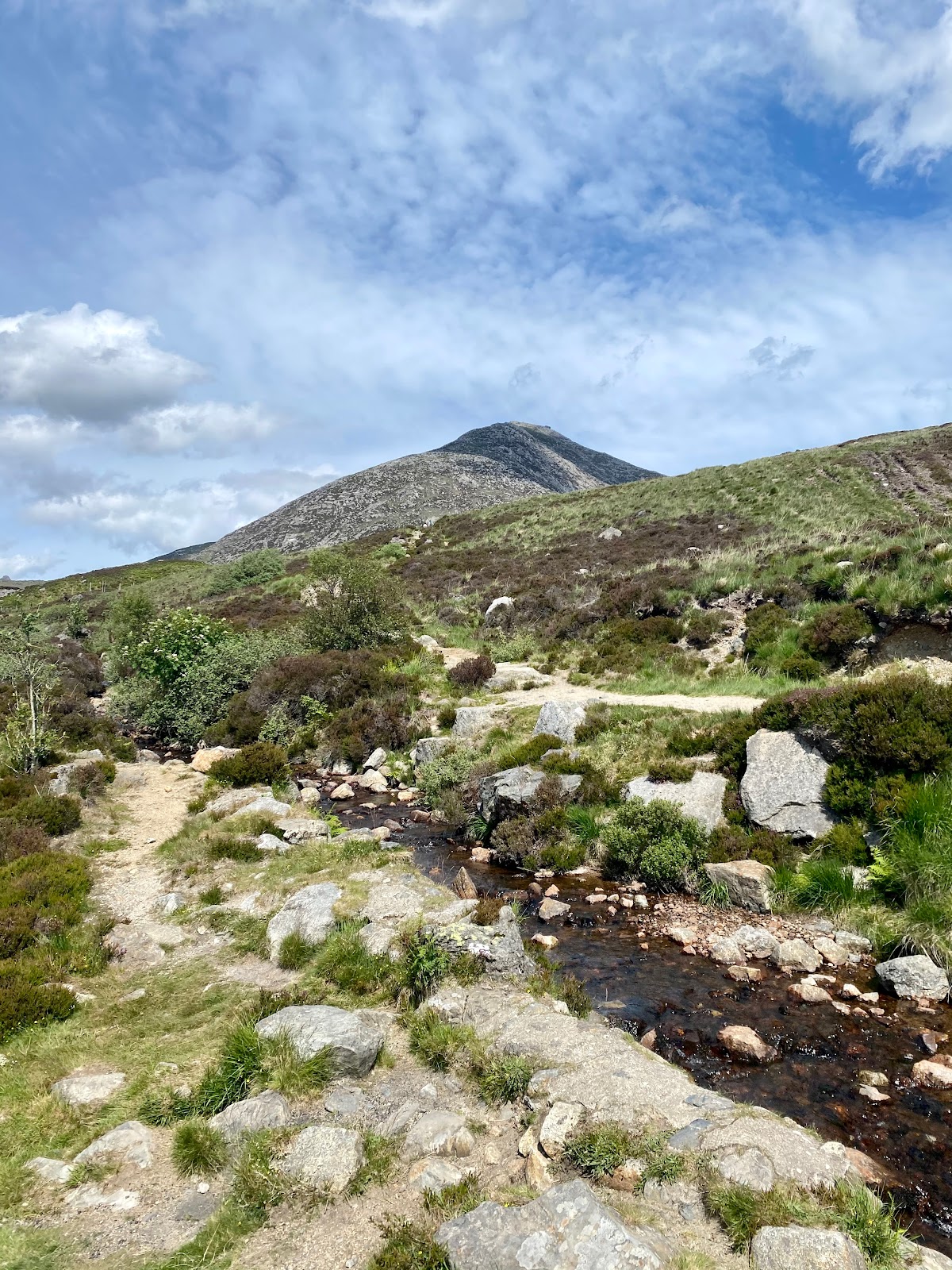 And after all that effort, we were rewarded with a view of …. clouds. Seriously, we were just standing in the middle of a white haze, much to our frustration. There were a few moments with a break in the cloud cover, when we would catch a glimpse of a spectacular view of the other three Corbetts, which had incredibly steep, craggy ridges that we were not expecting at all! Normally you’d be able to see over to the Kintyre peninsula; Arran sits nestled between it and Scotland’s west coast, in the Firth of Clyde. We did catch a few glimpses of the Ayrshire coast we’d sailed from on our descent though, when we got below the cloud level again, as well as of the rest of Arran itself. We passed far more people on the way up as we went down, who had likely come on a later ferry, and they were in for better views than us, as the sun was shining bright by the time we reached the base again. However, they would no doubt be much hotter and sweatier at the summit than we were! Back at the car, we did a rather impressive changing of clothes and general freshening up in the boot, so we no longer looked like sweaty messes just off a mountain.
It was just after midday by this point, and we had four more hours before our return ferry, so we set off driving the northern circumference of the island – Arran has one road that loops its circumference, with one other that cuts across the middle, and that’s about it. This was broken up by numerous stops to take photos, both of Goat Fell again from a distance, and the coastal views alongside us. We also stopped at the Lochranza whisky distillery, which was closed for tours at the time, but the gift shop and cafe were open, so we had lunch on the picnic tables outside – the sun was out and it was really quite warm by this time! – and browsed the whisky selection, each coming away with a different bottle to try that evening. We also stopped at the small waterfront castle near the town, which was surrounded by the most spectacularly blue ocean!
As we continued down the west coast of Arran, we stopped a few more times for viewpoints, as the water was just so unbelievably blue; we later learned that the tides had washed some sort of plankton up into the Firth of Clyde that week, which was what was causing the colour. This is a rare occurrence, so we were very lucky to have caught it! We also stopped off at some areas that were marked as seal viewing points (according to Google Maps anyway), but sadly there were no seals to be seen on this occasion. We also thought about going to see the Machrie Moor standing stones in the area, but realised we’d have to walk quite far from the closest car parking, and might be struggling for time to catch the ferry back, so gave them a miss this time – there’s certainly a few places on Arran, including the southern half of the island, that we might need a second visit for. 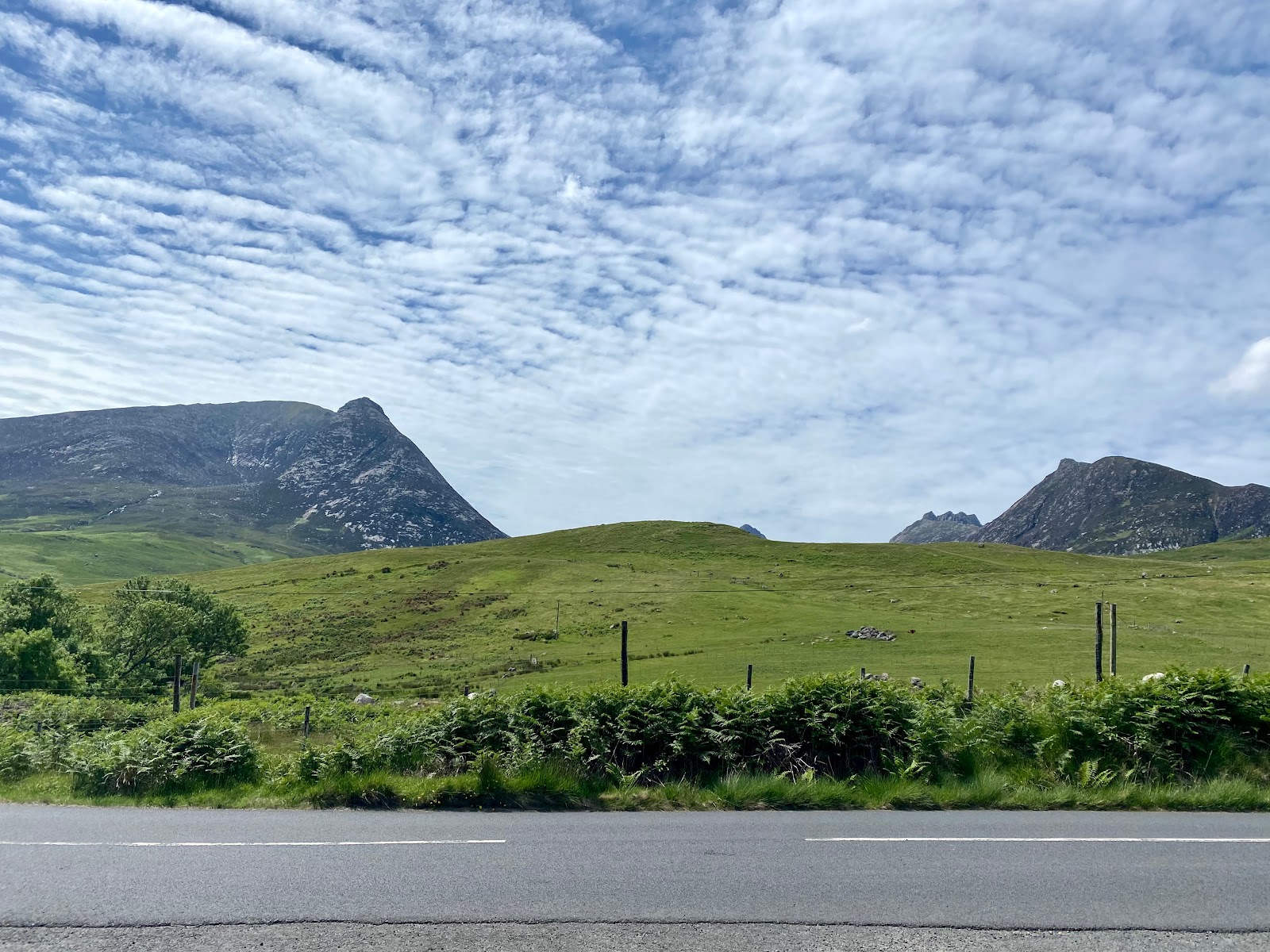 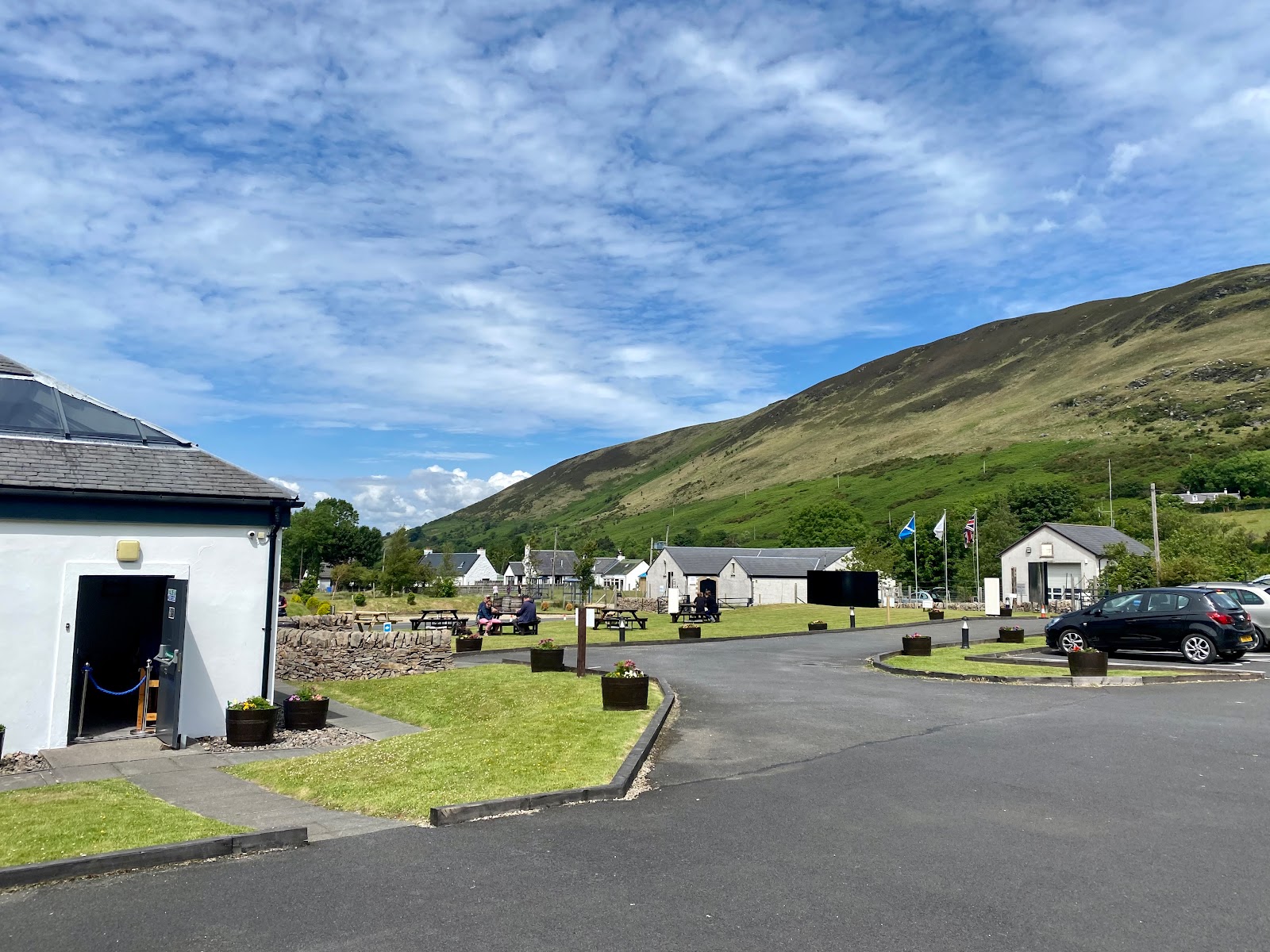 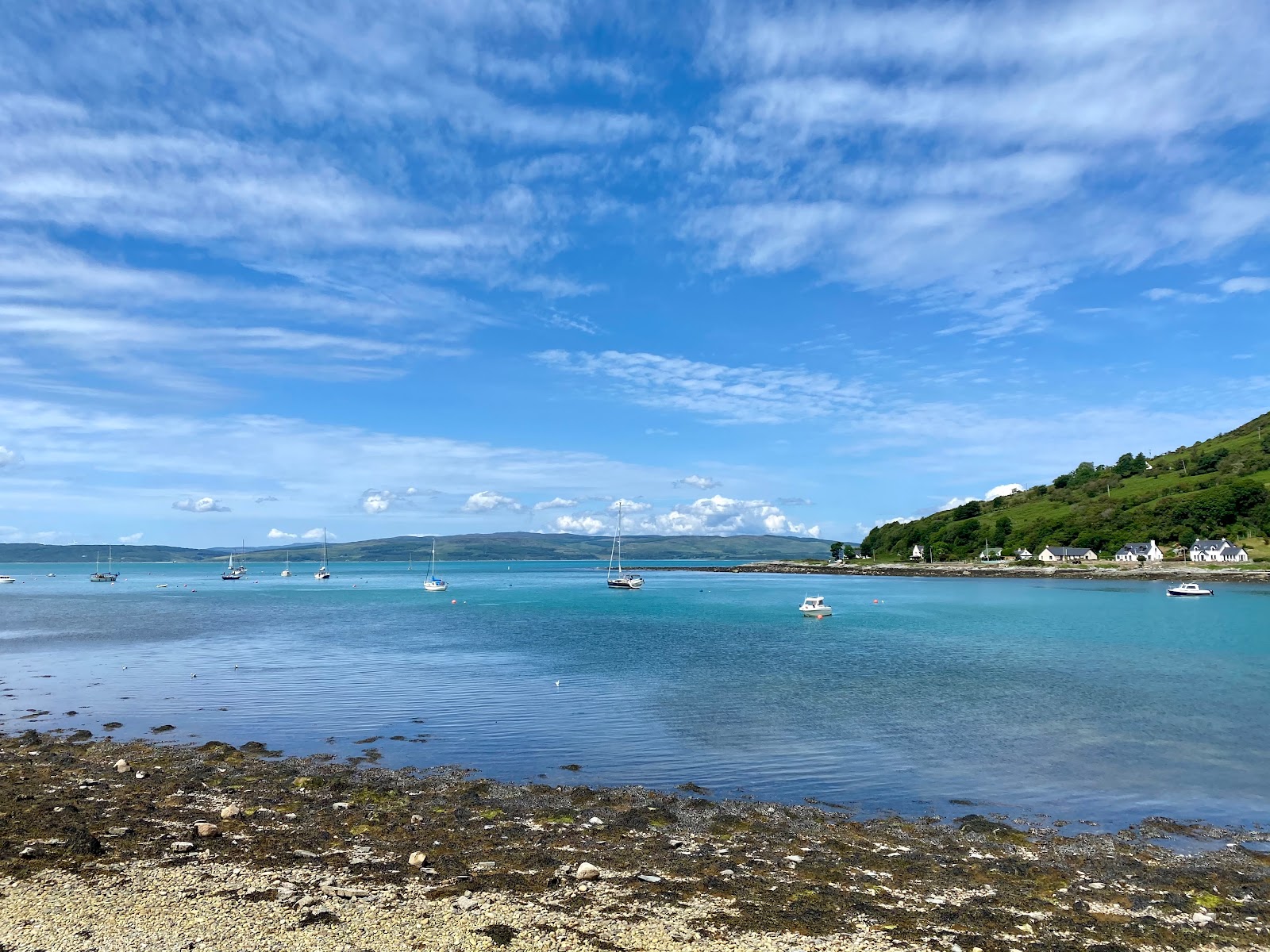 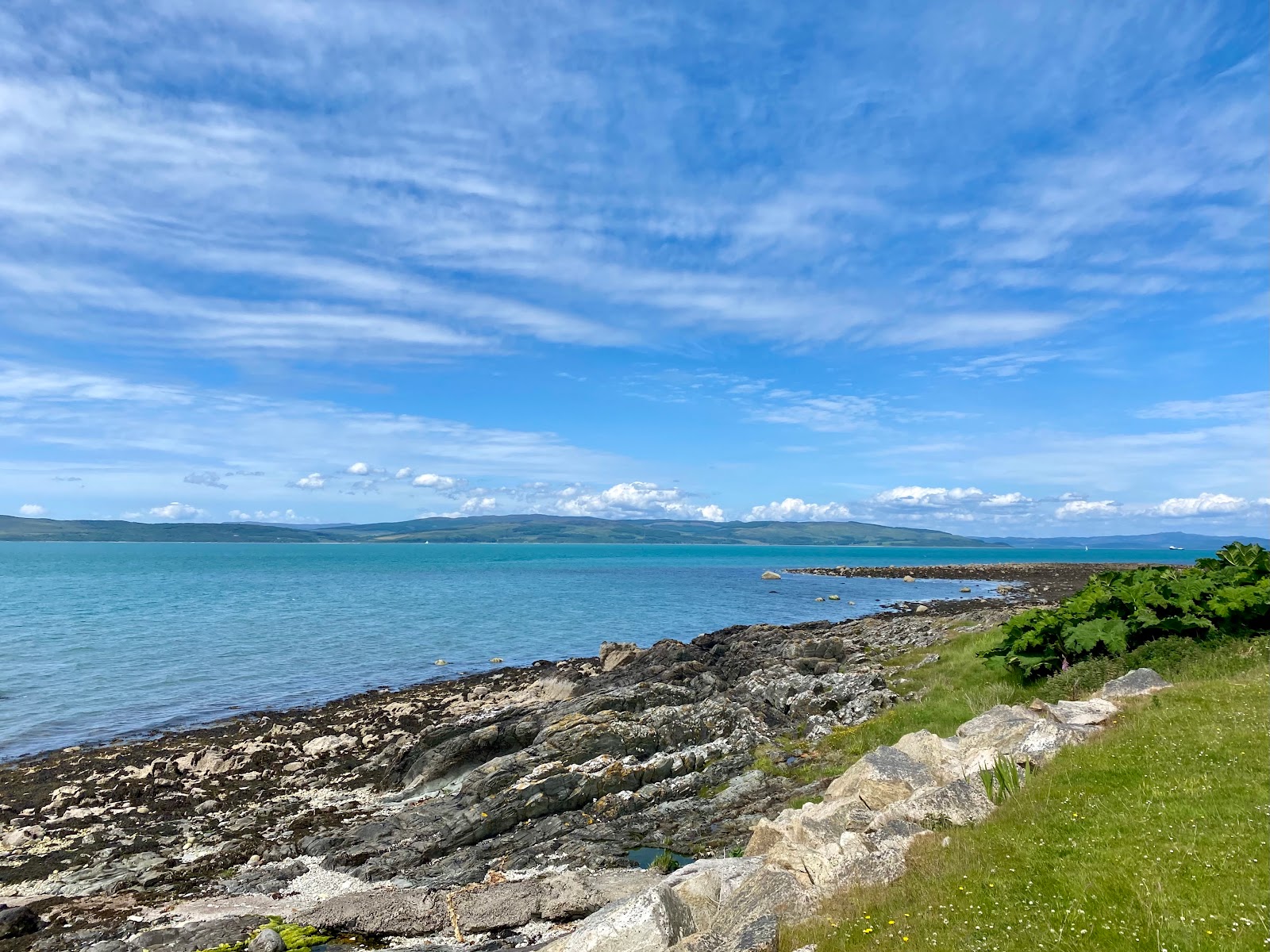 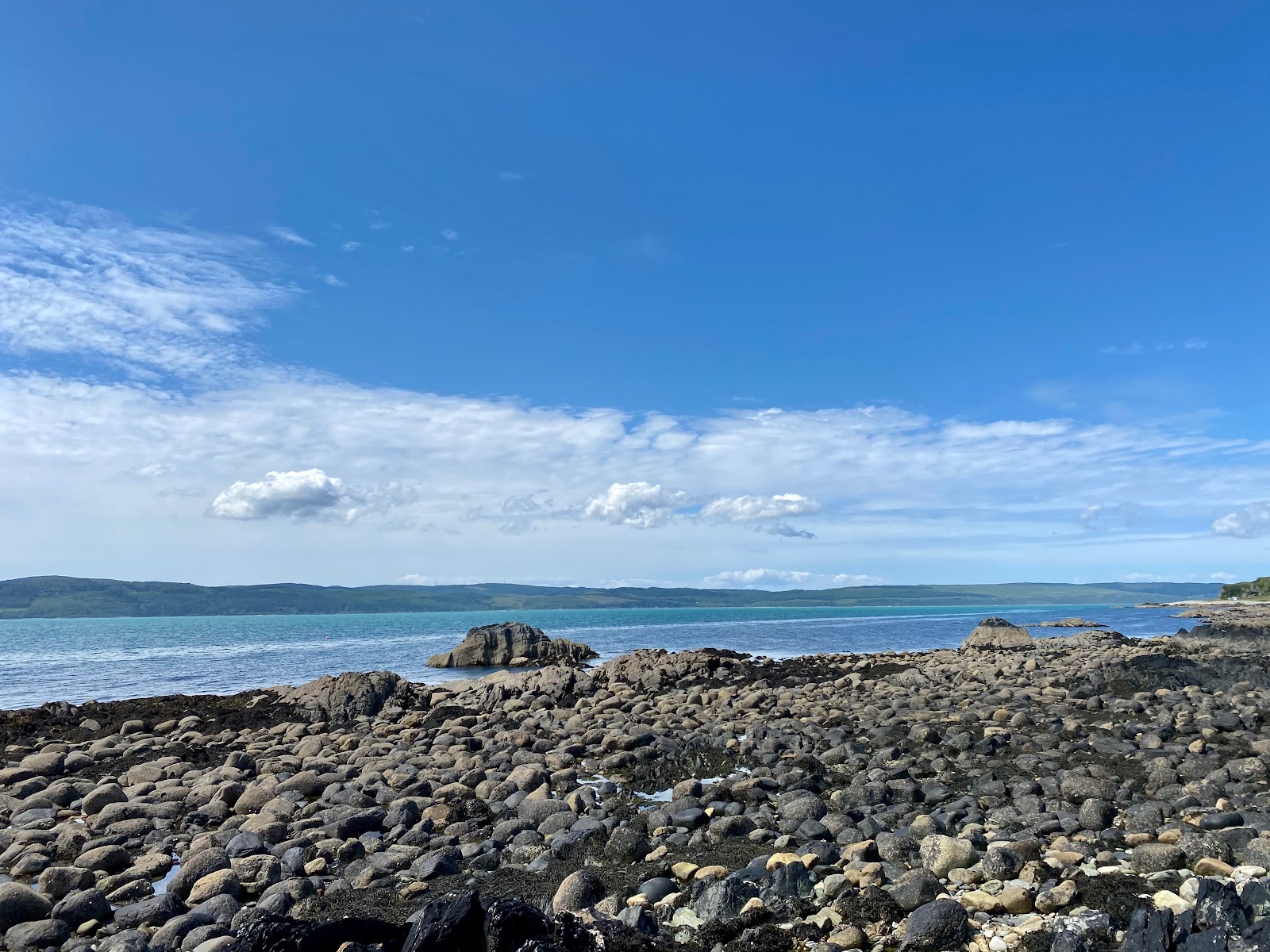 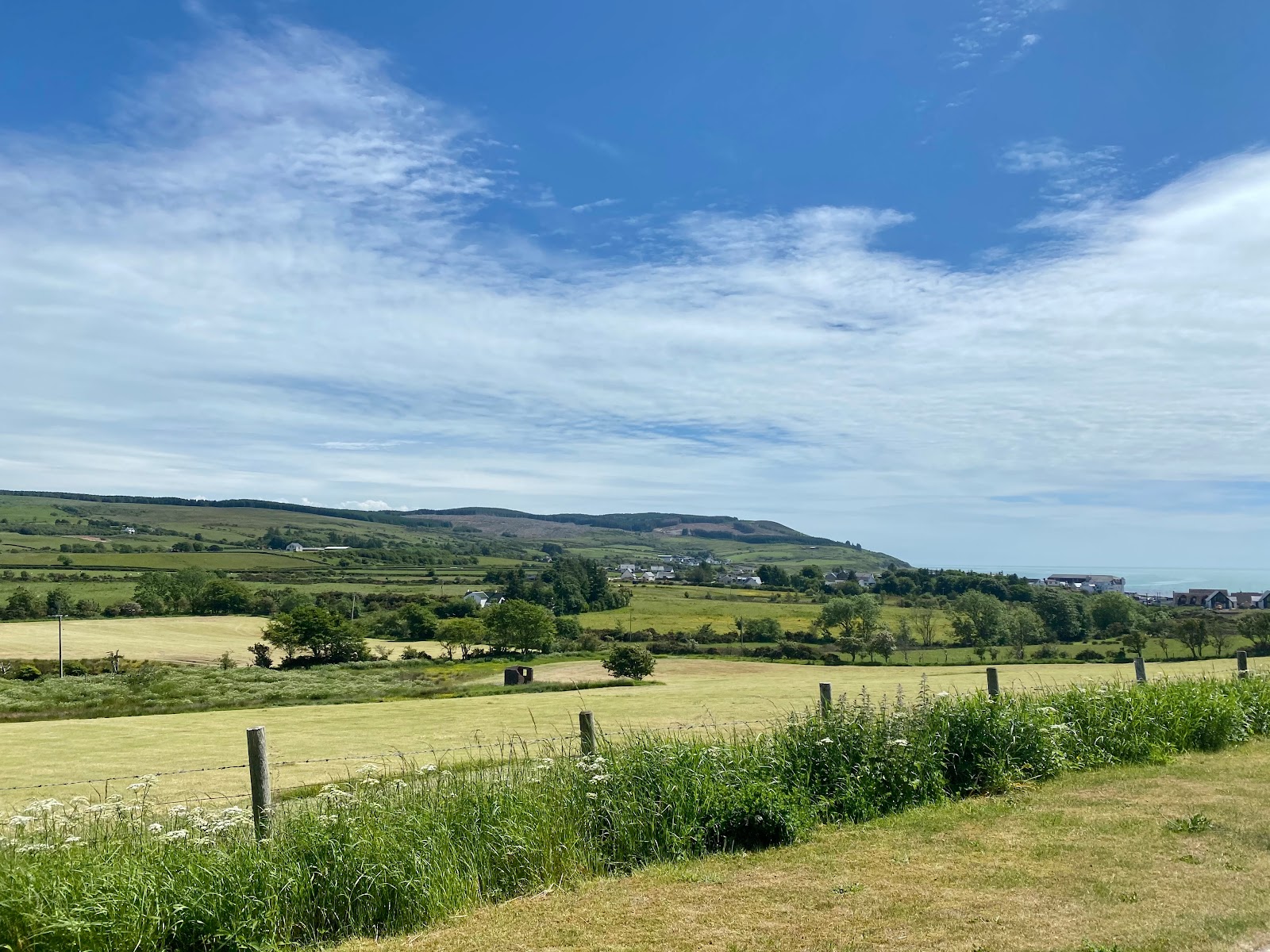 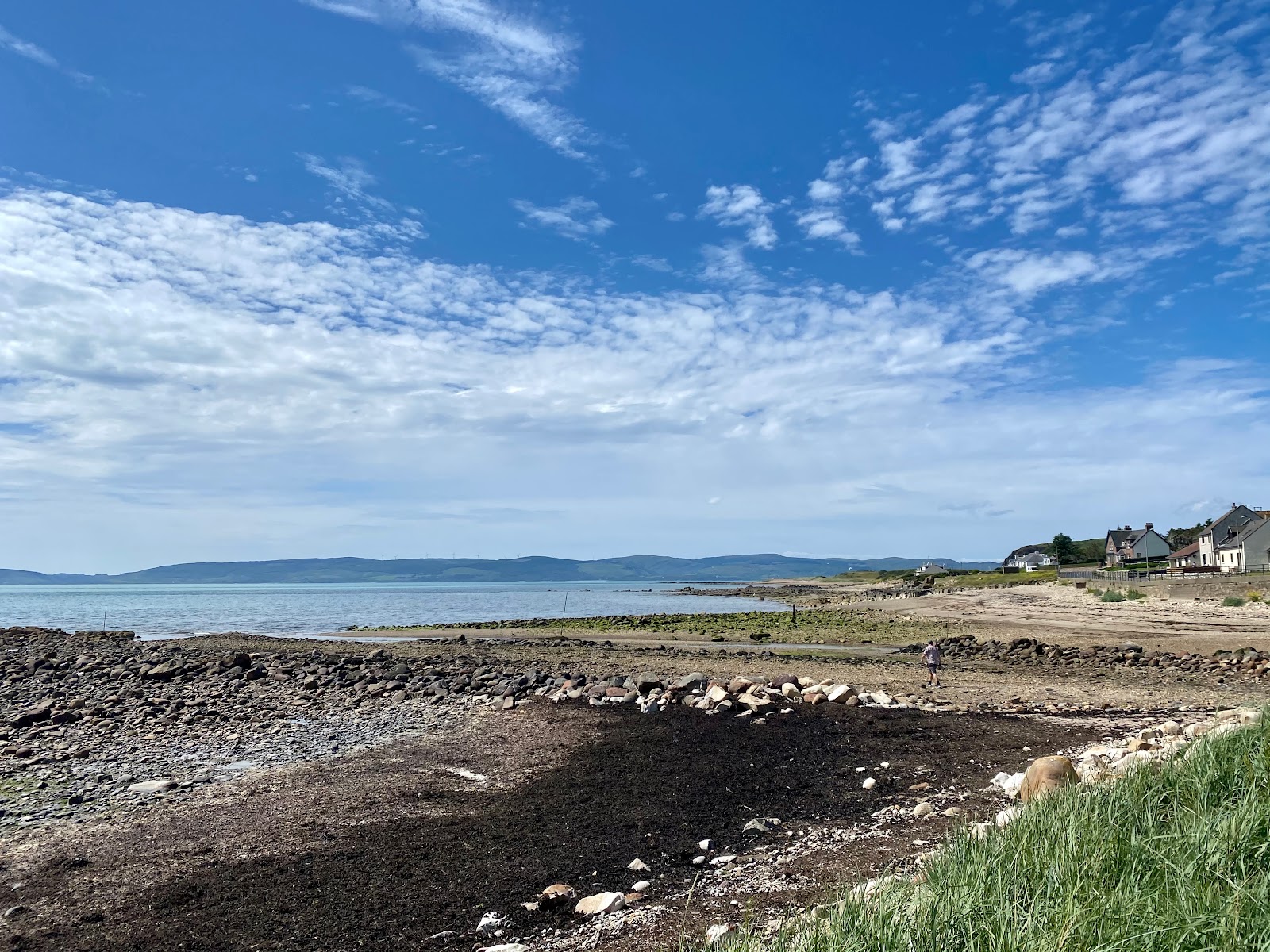 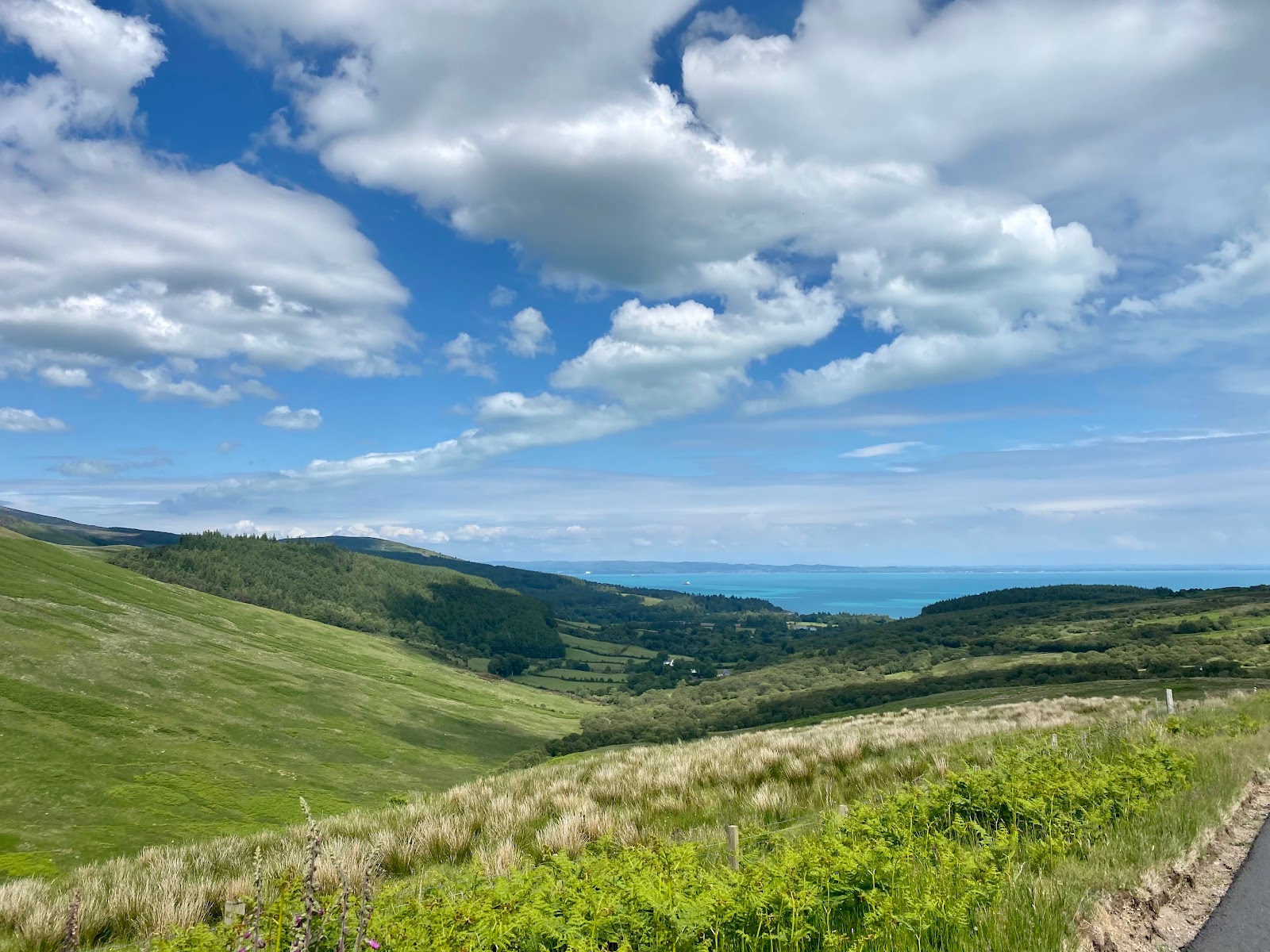 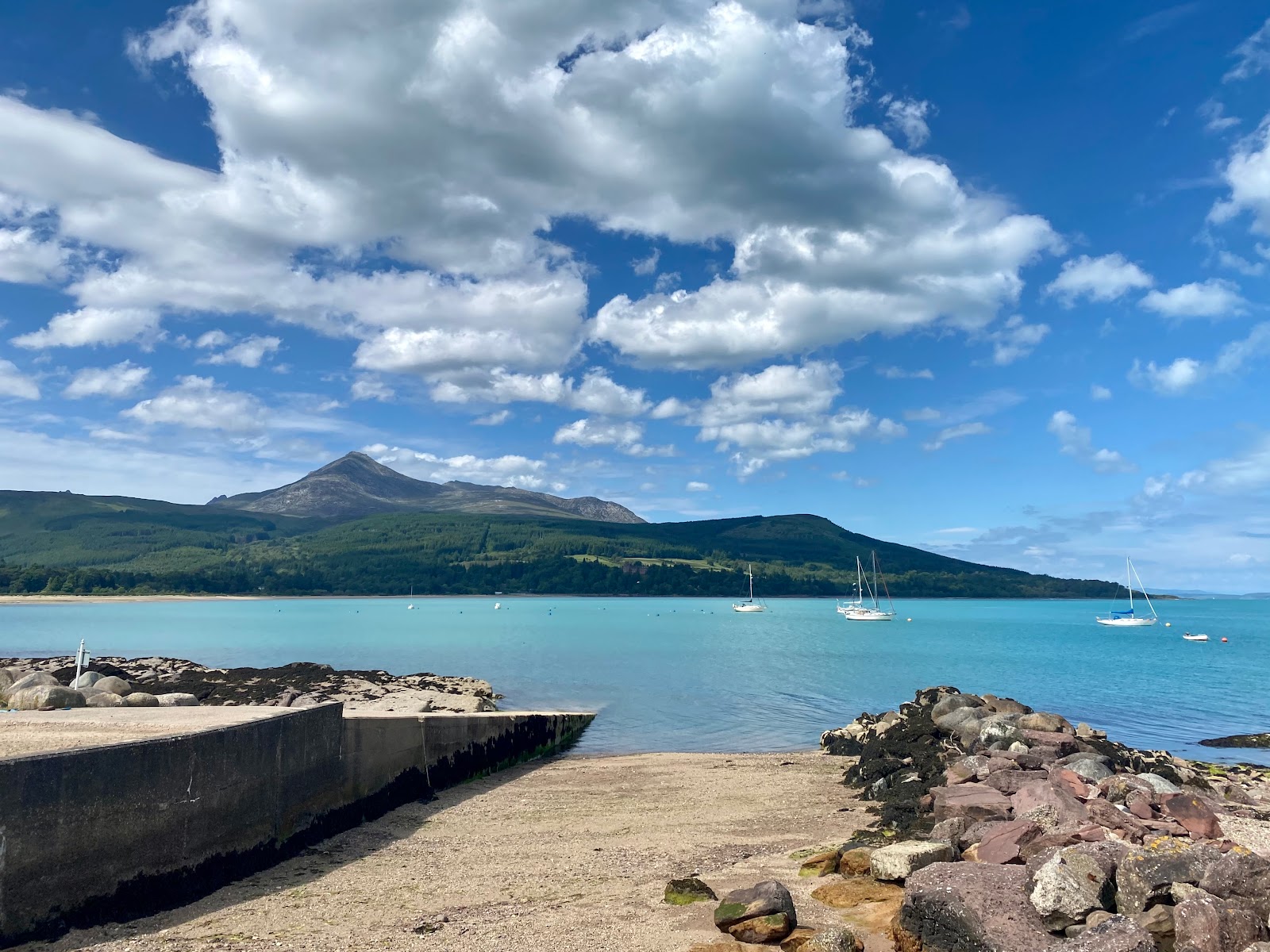 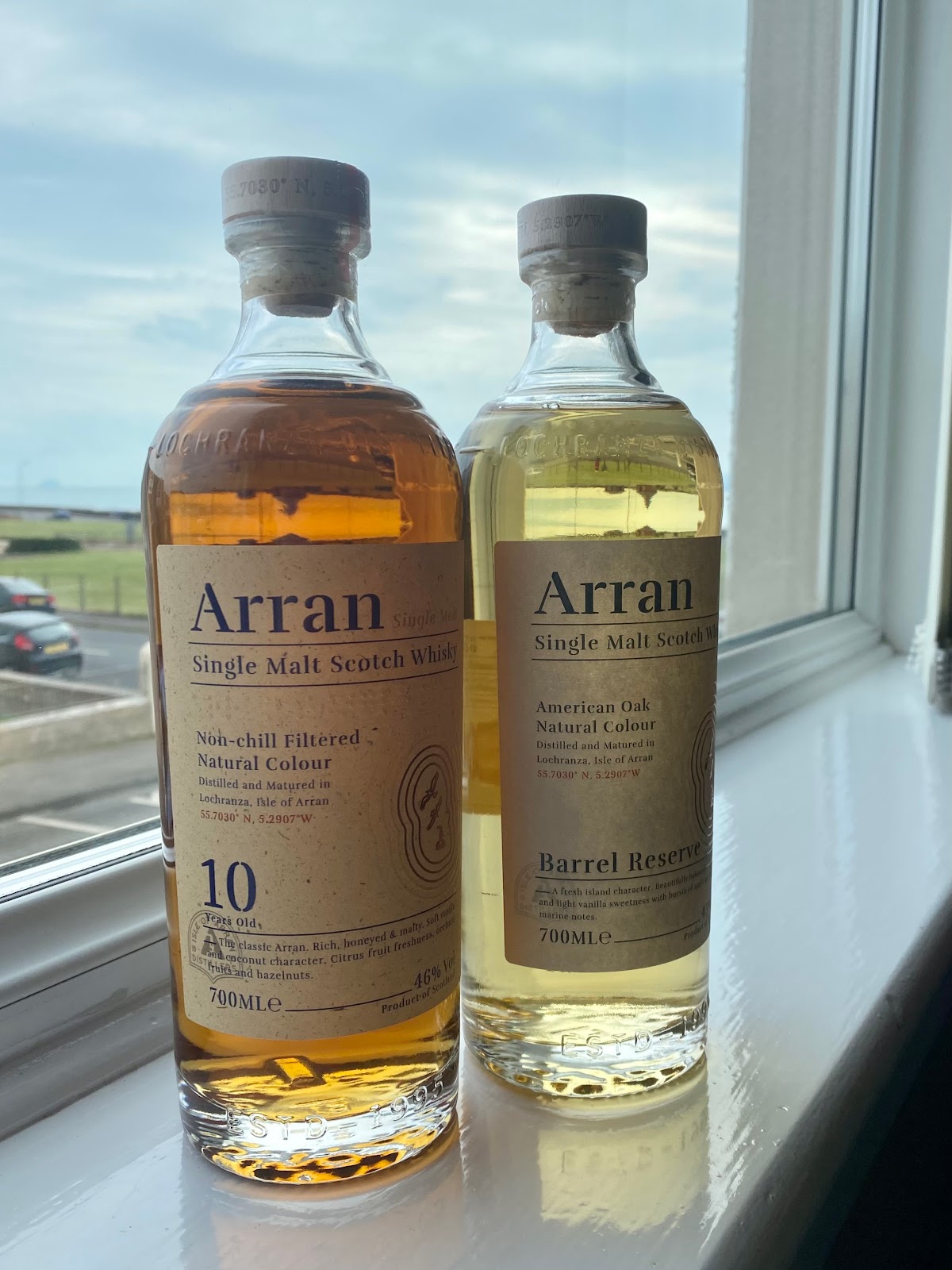 It became clear as we drove south though, why Arran is referred to as ‘Scotland in miniature’ as the dramatic mountains of the north gave way to rolling green hills of farmland, much like the south of Scotland where we’re from. We continued as far as Blackwaterfoot, stopping here to have a quick look around the small town, before taking the road across the middle of the island back towards Brodick, swapping our brilliant blue coastal views for equally stunning, sweeping views through the island’s valleys and hills. Back in Brodick, we wandered up and down the coastal road, where we had an excellent view of Goat Fell, now that all the clouds have lifted off its peak, and stopped at a little cafe for milkshakes, before catching a late afternoon ferry back to the mainland.